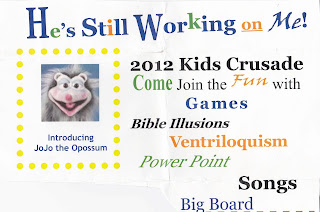 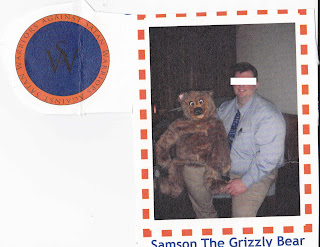 I removed this from the bulletin board at the Former Hometown ("Former" since it is no longer my Hometown) transit center (after the event had passed, or course - I'm not a monster). I had to cut it down with scissors into manageable sizes for my scanner, and to remove participants' personal information. I just thought it was both hilarious and disturbing for various reasons. 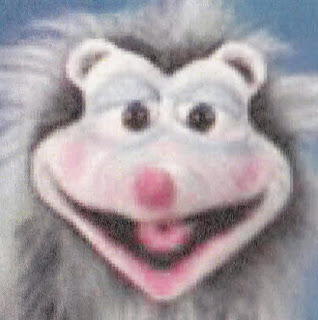 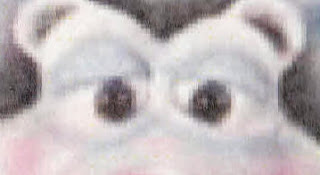 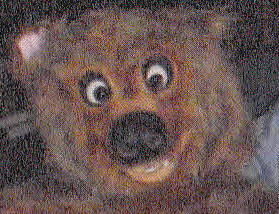 As you can see, the image of JoJo the Opossum's eyes are a lot more pixillated looking than those of Samson's, and it's not from me zooming in on the image. It appeared that way on the original poster. It made me think that Reverend Chub Bub must have gotten the image off of a website and blown it up himself. I did an image search on "opossum puppets" and immediately found this: 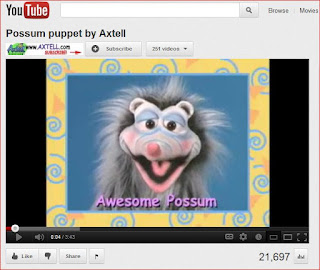 It's exactly the same image as on the poster, right down to the position of the hair. This led me to the website of the company that makes the puppet, which also made Samson. Now there's nothing wrong with using an image from the web - it just seems odd not to use your own photo if you actually own the puppet. 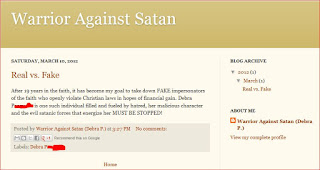 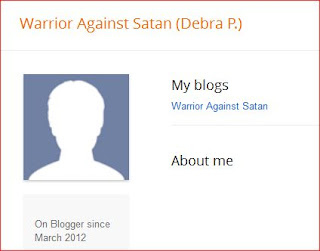 I did a search on "Debra Pasquella" and found she has a blog that mixes LGBT issues and spirituality.  It seems like just the sort of thing that a wing-nut "Christian" like "Debra P." would foam at the mouth about. I finallly concluded that "Warrior Against Satan" was identifying "Debra P." as Satan in the parentheses.

It's interesting that "Warrior Against Satan" joined Blogger as recently as March of this year, posted once about Debra Pasquella and hasn't made a peep since. He or she probably threw holy water on an image of Debra Pasquella on their computer monitor and was electrocuted.