I love a lot of things. Three of them are Halloween, Hunter S. Thompson and Frank Zappa. Fortunately for me, those three things are converging next month, and I am a happy man.

There is a local Frank Zappa tribute band called For the Love of Frank. I've been to all of their shows, except for one or two which were basically trial runs at a tiny bar in Mountain Town before I knew of the band's existence. The first time I saw them, at a funkily fantastic place called Lost on Main in downtown College Town, they were actually playing with none other than Ike Willis - long-time Zappa second banana and a man of awesome voice and guitar skills. Another time Ike and two other Zappa alumni - Ray White and Bobby Martin - played with FTLOF at the fabulous Sierra Nevada Brewing Company's Big Room - one of Northern California's premiere venues for live music. But venues big or small, and with or without Ike, when FTLOF plays, a splendid time is had by all, and especially by yours truly.

Ike is returning to play with my local musical heroes on Tuesday, October 29th, again at my newly beloved favorite priced-right downtown night club. The first time they played together, the audience was invited to "dress like a freak", but sadly, not many obliged. Now, being so close to Halloween, this is again being encouraged. I plan on attending as my favorite freak: HST, or more specifically Raoul Duke from Fear and Loathing in Las Vegas: 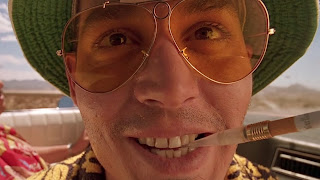 This has been my default Halloween costume several years in a row (except last year when I was Bane): 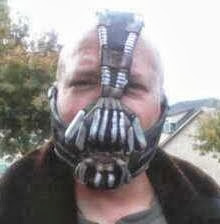 But back to HST - my son thinks I'm in a rut, but I think of it as refining and perfecting the costume. Over time I've collected some exacting parts of the costume: Las Vegas visor, sunglasses, cigarette holder, etc. And this year I think I've lost enough weight that I can pull off the costume without looking more like Saul Bloom from Ocean's Eleven than Raoul Duke: 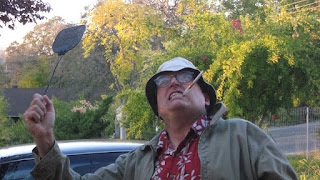 And to top it all off (in a manner of speaking), I'm going to shave the top of my head to match my literary hero's 'do (because hair with the visor just won't work and bald caps are for wimps!):

Here's a preview of how that might look in progress:

So I was really looking forward to the show. Before I even knew what my work schedule would be like at the end of October (we bid for new schedules four times a year, and lower echelon guys like me can seldom be sure what we'll get), I requested (and received) October 29th and 30th as vacation days so that I wouldn't risk missing the show and so I could stay up late, have a good time (maybe a couple of drinks) and not have to worry about going to work the next day. Then I could lay low at home with my weird head for a day and then go back to work on Halloween proper, again in full regalia. One nice thing about my job is they let us drive in costume (provided it doesn't interfere with the safe operation of the coaches or cause fear and loathing in the passengers).

Then I got my new schedule, and it turned out I had been wise to choose that course of action - I now work late on Tuesday nights and have to go in agonizingly early on Wednesdays - the very night and day after the show.

Then tragedy appeared to strike: I needed to cash out my vacation pay because of an emergency bill, so I had to rescind those vacation days I had requested. I was thinking that maybe I wouldn't go to the show at all, and was feeling rather sorry for myself as a result. Then I found out that due in part to my length in service and our new union contract, I now earn a respectable 6.67 days per month of vacation pay. A quick calculation and a confirmation from the HR manager gave me the glad news that I would earn enough vacation hours by the end of October to cover the two days I had originally requested. So I requested them again and got them! Oh frabjous day! Callooh! Callay!

So everything is in place for what promises to be a high fine time of music and crazy badness, except for one desirable accessory:  anyone in my area interested in playing the attorney?