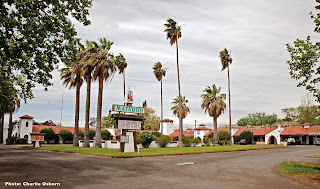 There's a funky old motel called the Matador in College Town. It looks like it was probably built in the '50s. It's pretty run-down now, and looks to be mostly of a residential nature. My favorite thing about it can be seen in a closer view of its sign:

I love how they are still using a technology that became the standard in the 1980s as a draw. I think it would be cooler if they went retro and installed rotary-dial phones in their unintentionally throw-back motel. They'd probably get a lot of hipster business.
Posted by Rimpy Rimpington at 1:09 PM 1 comment: