The following is mainly opinion and conjecture, not journalism. I’ve included

links to show where I found some of the items contained herein.

I was at my local laundromat. The TV was playing with the sound off, when the

above ad appeared. I didn’t need to hear it, since the candidate’s words were also

printed on the screen. I was shocked by the inflammatory

‘Republicans' [sarcastic quotation marks hers] and wannabe socialists IN OUR

WAY” [capitalization mine]; “shutting down the federal government to break Biden”;

and “the Marxist agenda today’s Democrats endorse” tend to get one’s attention, for

I searched for information about Heidi St. John. The first hit was for her eponymous

website, with the subheading “The Busy Mom” (heidistjohn.com). She writes books

with titles like “The Busy Homeschool Mom’s Guide to Romance” (yuck), and

“Becoming Mom Strong: How to Fight With all That’s in You For Your Family and

Your Faith" [incorrect capitalization hers].

As mentioned, she home schools her children. She also has a podcast, a blog, and

speaking engagements. Oh, and she’s running for U.S. Congress for the

When I visited her campaign website (heidistjohnforcongress.com), I was

of the mission statement on her home page:

“Together, we can make sure that Washington’s 3rd District remains a beautiful and

safe place to live, work, and raise our families for generations to come.”

The second sentence of the paragraph goes on to say:

"The United States of America is an idea worth sacrificing for, and the American

enough, in both Chrome and Firefox on my laptop, the sentence doesn’t appear in

bold-face. I’ve included a screenshot from my phone to prove it. 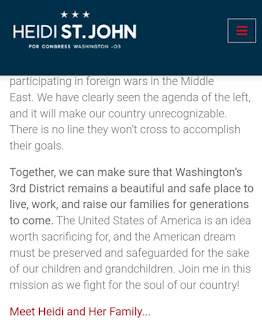 Just 26 little words in that first sentence. Innocent enough on the face of it, I

suppose. But they rang a faint alarm bell in my mind. They reminded me of another

"We must secure the existence of our people and a future for white children."

If you don’t recognize that phrase, it was spoken by infamous white supremacist,

alphabet, so HH, for “Heil Hitler”) in tattoos and written on vehicles as a code for,

well, being a fucking asshole.

There is another 14-word sentence that goes along with the first one: "Because the

beauty of the White Aryan woman must not perish from the Earth.”

So a total of 28 words, only two more than Heidi’s pithy little sentence. Heidi’s

phrase and the two “14 words” certainly share a lot of the same words, or similar

ones, as if she made heavy use of a thesaurus to try to dress them up differently:

Heidi: “we can make sure”

David: “we must secure”

Heidi: “for generations to come”

Heidi: “the American dream must be preserved and safeguarded”

David: “must not perish from the Earth”

Maybe I’m making too much of this. Perhaps I’m just being paranoid. I sure hope so.

But given the current rush toward Christofacism by the Republican Party, I don’t

have a good feeling about this. Also, the geographical location of Heidi is concerning.

For a little background, Washington State’s third district is in the southwestern-most

corner of the state. The largest city in the district is Vancouver, just a short drive

across the Columbia River from Portland. Politically the two cities couldn’t be more

different. Portland is famous for being “weird”, but also for being very liberal in a

state where it was once illegal to be Black. Vancouver is very conservative. Many of

the officers of the Portland Police Bureau live in Vancouver. This is probably mostly

because Washington has no income tax. By contrast, Oregon has no sales tax. So

many people who work in Portland live in Vancouver, and cross the Interstate Bridge

plenty of Portland police live right amongst the violent haters. There were many

treatment to the alt-right.

It’s late, I’m tired, and I feel like I’m starting to ramble. To sum up, I think that

Neo-fascists. And that scares me.