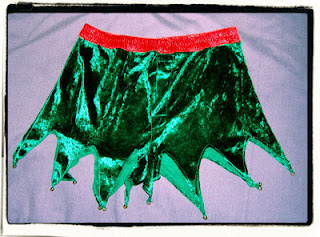 Well, folks, depending on where you are on this old globe of ours, you are only a day or two away from Ms. Scarlet's new Freakin' Green Elf Shorts Caption Competition. In honor of the occasion, I have added a new update to my Continuing History of the Freakin' Green Elf Shorts, highlighting the many contributions to the world of the Shorts by Inexplicable DeVice. Please won't you take a look?

Big news for fans of the Freakin' Green Elf Shorts! Ms. Scarlet, the current keeper of the Shorts, just oh, so casually announced a date for the long awaited continuation of the FGES Caption Competition. You can check out the deets (brief as they are) at her blog, but if you can't be arsed, basically the competition will begin on the 1st of January 2022, and a winner will be announced on the 16th* of January (GMT), of the same year even! Please enter your captions, and let's keep those Shorts a-movin'!

In other FGES news, I noticed the other day that the link to my Continuing History of the Shorts, over in the upper right corner of my blog, was not working. Upon further investigation, I discovered that a couple of extra letters had somehow gotten into the URL embedded in the image, rendering it useless. I don't know how that happened, or how long it had been going on. The problem has been fixed, and my apologies to anyone who may have attempted to use that defective link.

My Continuing History of the FGES will be updated presently to include these most recent developments, along with a few tangential references to the Shorts, which deserve to be in the record, but I was waiting for more definite news of their fate before adding to the history. Ah, who am I kidding? I'm just lazy!

Also, IDV was kind enough to create an updated map of the global travels of the FGES. It can be seen at the top of this blog. Thanks, IDV.
*Updated January 2, 2022 (PST) to reflect change by Ms. Scarlet of date of announcement of winner from her original post. Current caption competition is HERE.
Posted by Rimpy Rimpington at 9:11 AM 6 comments: