And to Think That I Saw It on Hawthorne Bridge 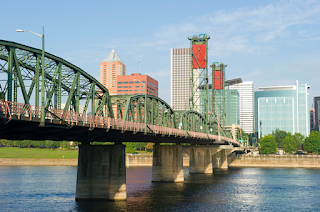 Of the many bridges in Portland, Oregon, one of the more notable is the Hawthorne Bridge. Built in 1910, it is the oldest lift span bridge in the United States. It also carries the most bicycle traffic of Portland's bridges, owing in large part to the roomy 10-foot wide bike/pedestrian sidewalks on each side.

Hawthorne Bridge is also the most frequently raised of the many movable bridges across the Willamette River, for a couple of reasons: 1) its undercarriage is the closest to the water of all the bridges (only 49 feet), so it must raise even for relatively small craft which can fit beneath the other bridges without their needing to be raised; 2) even when no water craft are present, due to its age the bridge is raised three times a day just to keep the moving parts lubricated and in good working order. So, traffic is frequently halted while the bridge does its thing.

Lately there has a been another frequent reason besides raisings that Hawthorne Bridge is often blocked to traffic: demonstrations against police brutality in the wake of the murder of George Floyd, as well as some tangentially-related protests.

The west end of the bridge is convenient to the Tom McCall Waterfront Park, a popular recreational and cultural center in the heart of downtown, as well as the staging area of many of the demonstrations. The westbound exit of the bridge - Main Street - passes between the Multnomah County Justice Center (home to the Portland Police Bureau and county detention center) and the U.S District Courthouse. Directly across from these buildings are Lownsdale and Chapman Squares, two one-block parks. This four-block area has become the locus of the daily demonstrations and protests.

Madison Street - the eastbound approach to the bridge - also passes alongside the Justice Center. So when protests get a little too rowdy, use of Hawthorne Bridge becomes impossible, even if the action isn't directly related to the bridge. Most protests begin in the evening, but sometimes they start during the day, such as when members of alt-right groups decided to have their own rallies, and mayhem ensued.

We Portland bus drivers carry predetermined detour descriptions in the event of downtown demonstrations. We also have designated detours for more mundane closures of Hawthorne Bridge.

Shortly after the BLM protests started, a large group of local strippers had their own march to bring attention to racial discrimination in Portland's strip clubs. In case you haven't heard, Portland is also famous for its high ratio of strip clubs to population. Many of the demonstrators marched across Hawthorne Bridge in their scanty work attire: 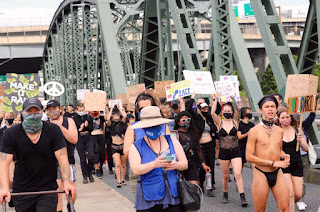 Sadly, I didn't get to witness that particular event.

One day a few weeks back, I was driving (I don't own a car, so any references to me driving mean I'm working) on Hawthorne Bridge, and there were two men walking a large and very fluffy llama toward downtown. I slowed down to take a good look at this amazing, happy-looking creature. There was no ready explanation for why two men were walking a llama into downtown, but I was glad they were.

UPDATE: I met the llama! I incorrectly identified it as alpaca earlier. His name is Caesar the No Drama Llama. He was at a Black Lives Matter rally I attended. You can follow him on Facebook and Instagram. 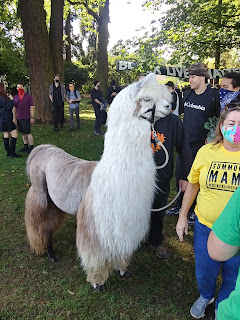 When I first saw him on the bridge it was before he got a hair cut. Imagine that fur covering his entire body!

But just the other day I saw the most incredible thing yet on Hawthorne Bridge. As I describe this sight, some of you may recognize who I'm talking about, but I had no prior knowledge of this group, so my mind was somewhat blown by what I saw.

At first sight, I saw about half a dozen women draped head to toe in very red robes, walking slowly in a line toward downtown. At first I thought they might be dressed up like characters from "The Handmaid's Tale", but on closer inspection, they didn't have the white bonnets, and their costumes were much more complicated. I don't know much about fashion, or history, but I think their garb could best be described as Medieval. They wore something like turbans atop their heads, with shrouds that hung down along the backs and sides of their heads. Their clothing had lots of folds and cords and such. But of course, the most remarkable thing was all that red. Every inch of their elaborate costumes was a deep, dark shade of red.

There were about six women. Most of them were walking with their arms up at waist level and angled slightly outward from the bodies, their palms up, in a prayerful attitude. Two of them were carrying what I first took to be large peace symbols, or possibly just wheels with four spokes above their heads. They all stared straight ahead. I slowed way down to get a better look, but their shrouds hid their faces.

I also noticed that two official Multnomah County pickup trucks were parked in the left hand lane of the Madison Street approach to the bridge with their yellow roof lights flashing. It looked like perhaps they were preparing to close the bridge. I wondered if a protest was fomenting. Perhaps the red women were heading toward it, but all seemed quiet as I passed through the usual protest area.

Shortly after crossing Hawthorne Bridge, my route makes two left turns and then returns in the opposite direction, but by the time I got back to the bridge, the women were nowhere in sight. For the rest of my shift, I puzzled over who these mysterious scarlet figures were and what was their purpose.

My shift ended a few blocks east of the bridge when another driver took over the bus. As I was approaching the relief point, a message came over my mobile data terminal (MDT) telling us to use our Hawthorne Bridge detours until further notice. I was going to ride with the new driver as far as the closest point to the bridge before the detour began. I wanted to have a close look myself at the possible cause of the closure. I was also hoping to get another sight of the women in red. However, there was a passenger onboard who was really annoying me, so I decided to get out and walk the few extra blocks to the bridge.

When I got to the bridge, it was not closed. I was passed by other buses that use the bridge. It's likely that the detour had been cancelled by the time I got there. As I came to the east end of the bridge, the women in red were walking toward me. Yay! Perhaps I could talk to them and find out who they were and what they represented. Mayhaps they would let me take their picture. I didn't dare take a picture without their permission.

As we drew closer to each other, I began to feel very nervous. Seeing them head-on, I could now see that all their faces were painted deathly white. Some had bands and circles of other colors on their cheeks and around their eyes. The lead woman had a black band like a Zorro mask painted across her eyes. They were a formidable sight. I have this deep-seated fear (it's not irrational if you could see some of things I have seen, but it's too difficult to explain) of people wearing masks or with very pale faces. Still, I was determined to try to make contact with these creatures. I stopped as they passed, and rather lamely waved and said "Hi." They kept their heads straight ahead, but regarded me out of the corners of their eyes. None of them said anything. They just marched slowly and purposefully on past me. The red women were now being followed by two women and a man in normal attire. The plainly clad folks didn't march in procession, but they seemed to be familiar with the group.

I also now could see that the circles they carried contained what appeared to me to be a Roman numeral X, with horizontal lines at the top and bottom.

I stood for awhile and watched them go. I felt a bit shaken by this close encounter with something I couldn't explain, and by their somewhat spooky appearance and somber aspect. When they got to the end of the bridge, they turned off on a ramp leading down to an area known at the Vera Katz Eastbank Esplanade. I decided to follow them. When I arrived I found the group gathered around two cars in a parking lot. One car was an average mini-van, but the other was a mid-sized station wagon that had been hand painted in DayGlo pink. On the side in large black letters were the words "Climate Emergency".

The women were now standing about, talking among themselves and their three companions in street clothes. They were also beginning to remove their red garments, revealing street clothes underneath. Although my rational mind knew that they had to be people in costumes, it was somehow reassuring to see them reverting to normal appearances. I was also a bit disappointed - I had been fantasizing that maybe they were some sort of powerful sorceresses come to join in battle with demonstrators against the forces of evil.

I still wanted to talk to them, but my natural shyness had taken control. I sat on a nearby park bench for a bit until the group got into the two vehicles and departed. I thought that maybe now I had enough information to be able to find out about them on the internet.

That wasn't as easy as I thought it might be. Search phrases such as "climate emergency" and "women in red Portland" produced no useful results. Their presence on the bridge (and possibly downtown) had apparently not attracted the attention of the local media, because there was no mention of them some of the news outlets I checked.

I set aside my search for a bit. Later I tried "the red robed women of Portland", and that led me to this: 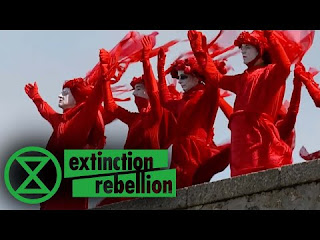 This is what I had seen. Not these very same individuals, probably, but just like them. Now I understood the circles they carried. They are part of an international group called Extinction Rebellion. They call themselves the Red Rebel Brigade. I'll let you explore those links for yourself, rather than me try to speak for them, but I will share with you the video from their website. Sorry - I couldn't figure out how to embed the video itself in this post. Anyway, t's quite moving.

So, there was a perfectly logical explanation to what I saw. Of course, there had to be. I didn't need to be such a Nervous Nelly. On the other hand, it was kind of fun to have my mind captivated by something I had never seen before, if only for a bit. But I should have remembered the admonition of Marco's father: 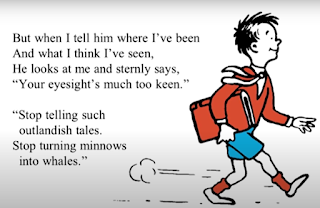